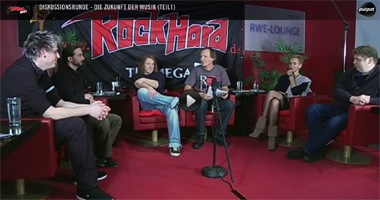 Before leaving to "Hellish Rock II" Tour, Kai participated in an interesting discussion forum at at a panel show of German Metal Magazine "Rock Hard TV" (Online Stream) and discussed about the future of music with different persons involved in the media scene, like Antje Lange from Century Media,who did a great job for Gamma Ray when she still had been working at NOISE in Berlin. One main topic is filesharing, youtube and the future of the new media sector with spotify, etc. Kai is taking up position and gives very clear examples. It's especially interesting as the attention grew after Gamma Ray deleted a lot of youtube uploads during the last months.

‘Master Of Confusion’ and ‘Empire Of The Undead’ are the first two new studio songs by Gamma Ray to be released after the successful studio album “To The Metal!” which brought Gamma Ray at the highest positions in the charts worldwide.

“We have been away for quite some time”, declared guitarist and founding member Kai Hansen. "We have released what we consider a very beautiful live product, ‘Live – Skeletons and Majesties’, but we felt it was time to release some new music by the Rayz… Yes, we planned to have an album ready by now but deadlines are not our best friends. No, seriously, although we have already started working on the new album, we did not want to wait any longer and thought we should let the fans listen to these two new songs before the world tour with Helloween. We have also recorded cover versions of two songs we have always loved and… before anybody could say that a CD can feature more minutes of music… we are also releasing the live material recorded for the ‘Skeletons’ Blu-ray that could not be included on the live CD. OK, it’s not a new album. But it’s 60 minutes of music… call it the longest single in metal, if you like!” 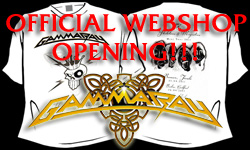 Finally it's about to come real and there is no question that it is overdue that the Official Gamma Ray Webshop opens! Already set-up in the background of the website, we are about to officially open the webshop October 15th, 2012 with plenty of items for you to buy, like T-Shirts, Longsleeves, Girlies, Patches and

"Skeletons & Majesties Live" features the live recording of the band's performance at the legendary Z7 in Pratteln, Switzerland from April 29th, 2011 and will now be released on 2CD, Blu-ray and DVD on November 30th, 2012. The DVD and Blu-ray also feature additional bonus tracks, lots of behind the scenes bonus material, rare archive material and interviews with the band.