Kai Hansen busy in a trip back to the tapes days... working on the extra material for the first Gamma Ray reissue. More news soon! 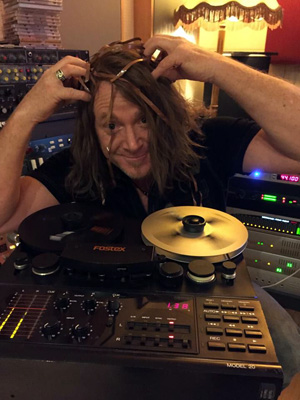 It’s more or less done, the wait is over. Finally, the 11th studio album from GAMMARAY “Empire Of The Undead” is almost* done and ready to go.

“Empire Of The Undead” the fast metal song in the typical GAMMARAY style that has influenced so many bands around the world, has appeared on the single / EP “Master Of Confusion” an appetizer the band released in 2013, just before touring the world non-stop with “relatives” Helloween.

GAMMARAY worked on the new album during various sessions in 2013, during and in between their perennial tour with Eike Freese at the mixing desk supporting the ever precious work of bass player and co-writer Dirk Schlaechter.
It was just after landing in South America, that an unbelievable news reached Kai Hansen & co.: Hammer Studio, their home, rehearsal place, studio and meeting point for many metal bands in Germany had been blown away by a terrifying fire-stroke, together with instruments, amps, tapes…
Back in their hometurf the band needed to get an overview about their losses only to do what they do best – move on! With that usual Kai Hansen smirk look…
Life is too good to stop and moan.

Nearly everything was destroyed, except the tapes of the almost finished new studio album.
“If this could not stop us… nothing ever will” – joked Kai Hansen -  who also added quotes.

“We got rid of a lot of shit that we gathered there. Unfortunately a lot of good equipment as well. Anyhow, we look into the future and we saved the production and we can continue now in this new place. By mid January we should be done with the work on this album and it’s up to the record company to release it – sometime in March.“

“Empire Of The Undead” will be released as CD, LP, Limited edition CD with extra visual content and a box that features the CD, a shirt and a poster.

GAMMA RAY'S album 'Empire Of The Undead', released 28th March, 2014 has been voted album of the month from 'RockHard' and 'MetalHammer' for April 2014. 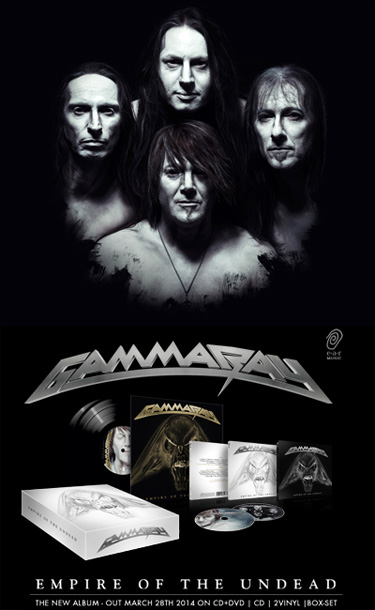 "EVERY SONG ON THIS ALBUM IS A HIT. GAMMARAY ARE DELIVERING MELODIC METAL AT ITS PRETTIEST FORM; MORE COLOURFUL AND VERSATILE IS ALMOST NOT POSSIBLE" - 6/7 METAL HAMMER (GERMANY), ALBUM OF THE MONTH

We are giving away two tickets to one lucky winr for the GAMMA RAY Show in Nürnberg with special guest: Rhapsody of Fire. 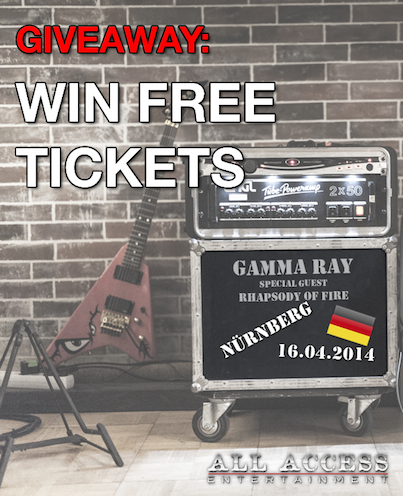 We will select a winner at random at 8:00 PM CET on Sunday, March 9th.

The winner can collect the free tickets at the box office at Löwensaal.

If you want to make absolutely sure you score a ticket, there are still some available for sale. This is not a Facebook promotion and there is no right of appeal.