‘Master Of Confusion’ and ‘Empire Of The Undead’ are the first two new studio songs by Gamma Ray to be released after the successful studio album “To The Metal!” which brought Gamma Ray at the highest positions in the charts worldwide. 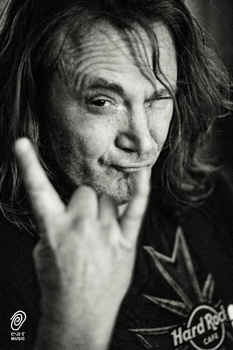 “We have been away for quite some time”, declared guitarist and founding member Kai Hansen. "We have released what we consider a very beautiful live product, ‘Live – Skeletons and Majesties’, but we felt it was time to release some new music by the Rayz… Yes, we planned to have an album ready by now but deadlines are not our best friends. No, seriously, although we have already started working on the new album, we did not want to wait any longer and thought we should let the fans listen to these two new songs before the world tour with Helloween. We have also recorded cover versions of two songs we have always loved and… before anybody could say that a CD can feature more minutes of music… we are also releasing the live material recorded for the ‘Skeletons’ Blu-ray that could not be included on the live CD. OK, it’s not a new album. But it’s 60 minutes of music… call it the longest single in metal, if you like!”

With its 60 minutes of pure and raw Gamma Ray, “Master Of Confusion” is a great way to wait for the new album, scheduled for the end of 2013. Coinciding with the start of the “Hellish Rock, Part II” tour, “Master of Confusion” will be released on March 15th, 2013 via earMUSIC.
Gamma Ray always takes its music and the relationship with their fans very seriously, and the band wanted this release to be priced as a mid price mini-album.

Kai & co. are not afraid to celebrate their peculiarity with humour and irony.
Reading the lyrics of the song ‘Master Of Confusion’ not too many clarifications are necessary…
Gamma Ray are indeed the masters of confusion, a trait all the fans and also the music industry had no option than to accept and appreciate. They bring chaos to other people’s lives, they miss important deadlines, they reschedule the release of the desperately awaited new long player, but they never miss a show, they never let a fan down, and in a world of calculated and career-driven rock stars, they are among the few remaining honest true heavy metal heroes.

Excerpt of ‘Master Of Confusion’:

The label’s calling, boys are you done?
The deadline's past, time to deliver
I am so sorry, we're running late
Some unexpected ghost in the machinery

In addition to the brand new studio song, “Master Of Confusion” features a second new studio track: ‘Empire Of The Undead’, showing the heavier side of the band, with an explosion of energy and pure Gamma Ray sound at its best.
The release is not free from tasty rarities: a brand new studio cover versions of British Glam Rock band Sweet (‘Lost Angels’ - “the reason I have joined a band many years ago”, stated Hansen) and a hidden treasure of NWOBHM (‘Death Or Glory’ by Holocaust).

“Master Of Confusion” is rounded off with six live versions (‘The Spirit,’ ‘Wings Of Destiny,’ ‘Farewell,’ ‘Gamma Ray,’ ‘Time To Break Free’ and ‘Insurrection’ recorded in Bochum) that were already included on the Blu-ray “Live – Skeletons and Majesties” but were not featured on the CD release (which included the show recorded in Pratteln).

Addition for the USA: "Master Of Confusion" will be released as a digital bundle only in the US on Tuesday, 19th of March 2013.

Addition for Japan: "Master Of Confusion" will be released as a digital bundle only in Japan on Tuesday, 17th of April 2013.

i´m waiting to the "Master Of Confusion"!!!